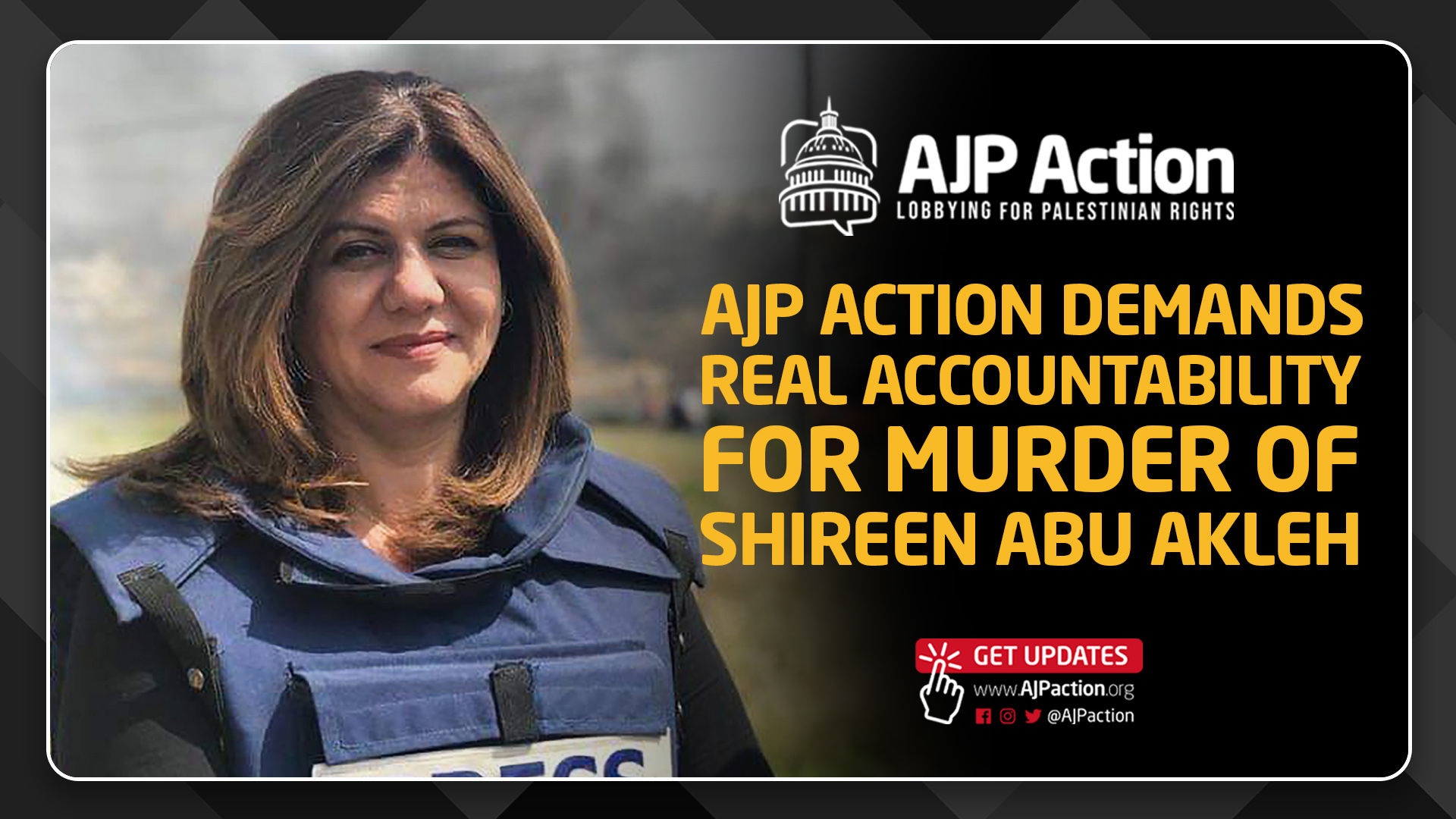 Americans for Justice in Palestine Action (AJP Action) is dismayed by the irresponsible statement released by the Biden administration on Israel’s killing of journalist Shireen Abu Akleh, who was an American citizen.

In the face of overwhelming evidence that an Israeli military sniper deliberately shot and killed Abu Akleh, the Biden administration has chosen to effectively cover for this crime, casting doubt on the origin of the US-made bullet, and went on to suggest that even if the Israeli military was responsible that it must have been “unintentional.” These kinds of apologetics are absolutely not how our government should respond when a foreign government murders an American journalist.

Of course, this is not the first time that the Israeli military has killed an American. Earlier this year, the Israeli military caused the death of American grandfather, Omar Assad, by handcuffing him and discarding him on the side of the road, leaving him to die in the freezing cold. There was also the case of Rachel Corrie, a 23-year-old American from the State of Washington, who was run over with a bulldozer by the Israeli military. Beyond American citizens, Israel is also responsible for the killing of thousands of Palestinian civilians through actions that the entire human rights community regards as war crimes and crimes against humanity.

What we are demanding from the Biden administration is real accountability for Israel’s crimes. This accountability begins by suspending all military funding for Israel, and it ends with bringing the individuals responsible for these crimes to justice. In the meantime, it is simply unacceptable for the President of the United States to conduct an ordinary diplomatic visit to a state that practices apartheid, and this is especially the case on the heels of the killing of an American journalist by this apartheid government.

In terms of immediate action for meaningful accountability for the killing of Shireen Abu Akleh specifically, we are demanding three simple actions:

The Biden administration claims to regard human rights as a central part of its foreign policy, and it has the mandate to protect American citizens. The aforementioned two steps are the very least required of them to live up to their most basic responsibilities.

Like all brutal authoritarians, Israel’s leaders want to expel a media outlet for requesting an investigation into the murder of one of its journalists. It is a scandal that Biden wants to keep arming & funding this apartheid government! … See MoreSee Less

Like all brutal authoritarians, Israel’s leaders want to expel a media outlet for requesting an investigation into the murder of one of its journalists. It is a scandal that Biden wants to keep arming & funding this apartheid government!
https://aje.io/und7mb