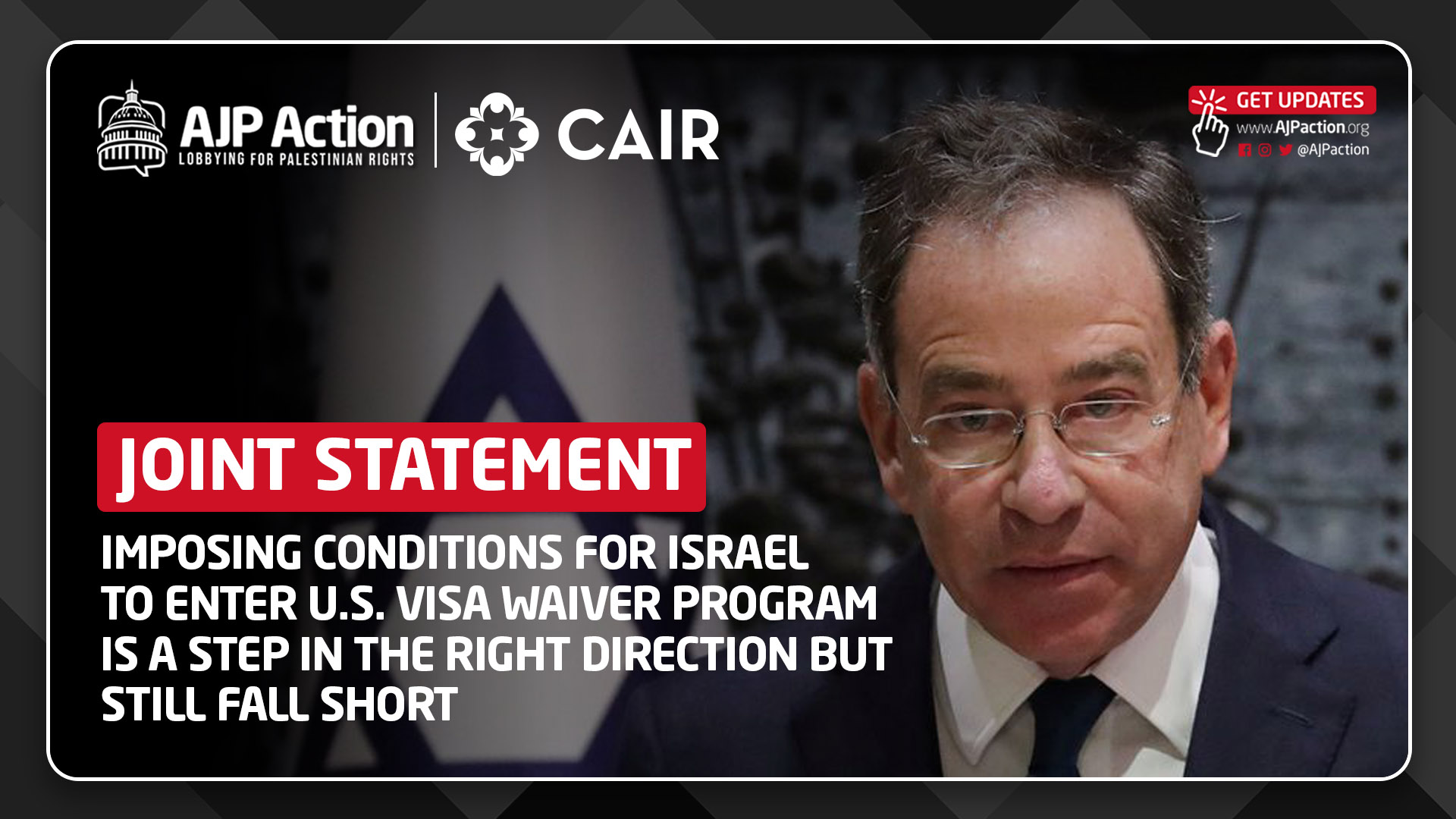 Imposing Conditions for Israel to Enter U.S. Visa Waiver Program is a Step in The Right Direction But Still Fall Short

January 23, 2023 – Americans for Justice in Palestine Action (AJP Action) and the Council on American-Islamic Relations (CAIR) today issued a joint statement warning that the terms reportedly being negotiated between the U.S. and Israel for Israel to enter into the U.S. Visa Waiver Program would still leave some Palestinian-Americans vulnerable to discrimination at Israeli checkpoints and does not secure their access to Gaza.

On January 18, Reuters released a report on the U.S.-Israel talks about Israel joining the U.S. Visa Waiver Program, which would allow Israeli visitors to enter the U.S. without a visa. Both AJP Action and CAIR have stated that the Israeli government does not qualify to enter the U.S. Visa Waiver Program because it is an apartheid government that systematically discriminates against American citizens of Palestinian, Arab, and Muslim backgrounds.

Even the U.S. State Department acknowledges that “some U.S. citizens of Arab or Muslim heritage (including Palestinian-Americans) have experienced significant difficulties and unequal and occasionally hostile treatment at Israel’s borders and checkpoints.”

As reported in multiple media outlets last week, U.S. Ambassador to Israel Thomas Nides spoke to Israeli radio about what Israel would need to do to qualify for the Visa Waiver Program, saying: “We have to be clear about reciprocity. Reciprocity will mean that Palestinian-Americans will be able to freely travel from Detroit to (Israel’s main airport) Ben-Gurion to Ramallah, and Americans who live in Ramallah will be able to go from Ramallah to Ben-Gurion back to Detroit.”

In a statement AJP Action and CAIR said:

“While we appreciate Ambassador Nides’ acknowledgment that discrimination against Palestinian-Americans at the Ben-Gurion Airport must come to an end, these terms still fall short given that the problem isn’t just the ability of American-Palestinians to reach the Ben-Gurion airport, but the harassment of U.S. citizens of Palestinian and other backgrounds that occurs at all points of entry into Israel or the occupied Palestinian territories. That includes the ability of Palestinian-Americans to travel to Gaza.”

“It is time for the Biden administration to stop looking for small pragmatic fixes to Israel’s problems to qualify it for even further unwarranted privileges and to realize that the entire apartheid government is built on systemic discrimination and atrocities. It is time to begin holding Israel accountable to the same standard as any other government in the world and stop supporting the Israeli government until apartheid ends.”