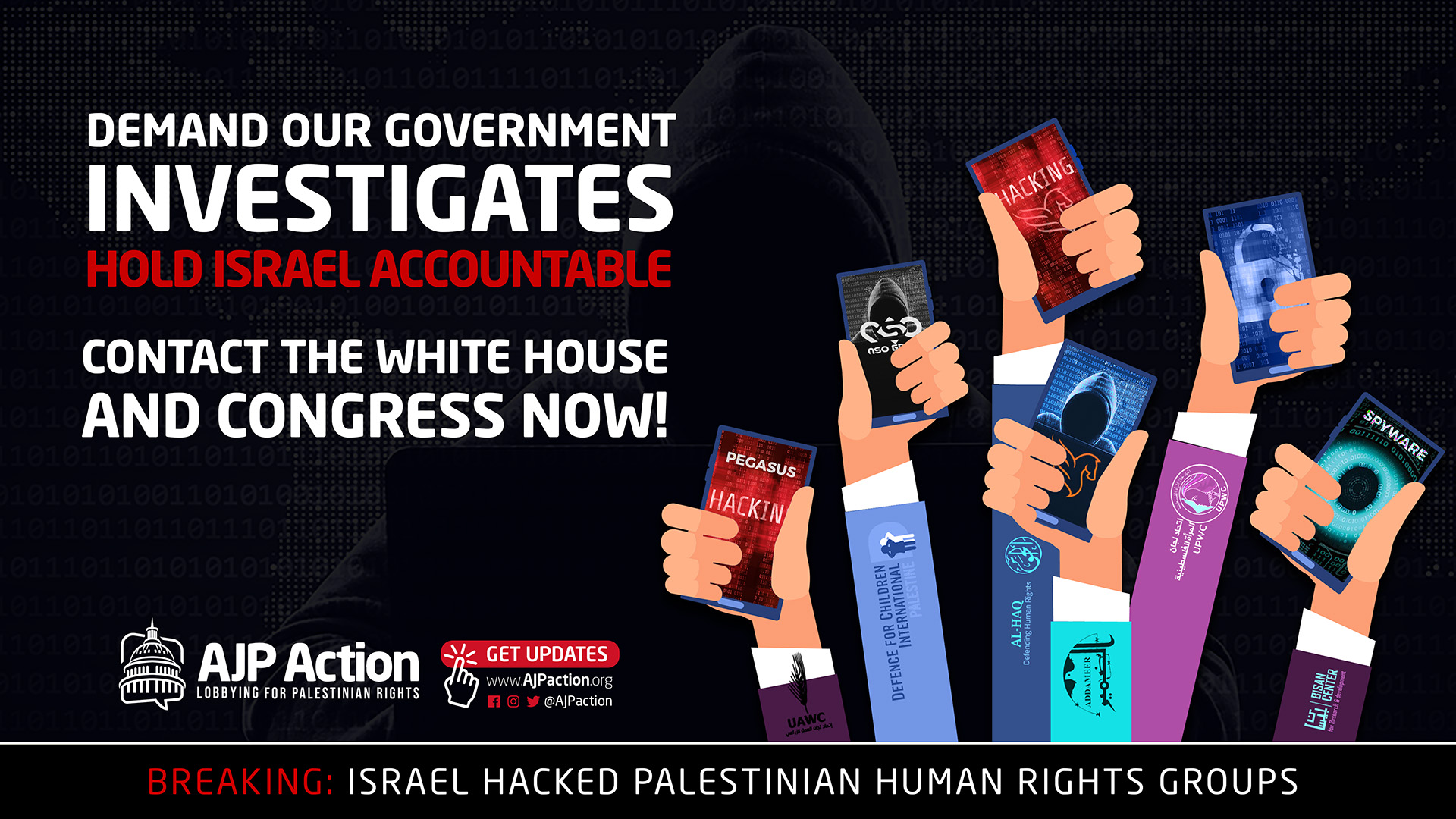 Just before Israeli Minister of Defense Benny Gantz announced last month the six leading Palestinian civil society organizations as “terrorist organizations”, the Front Line Defenders were contacted by human rights organization al-Haq in Palestine about the possibility of their technology being infected by spyware. Front Line Defenders launched a technical investigation and found that the device had indeed been infected by the Israel-based NSO group Pegasus spyware since July 2020.

The Israeli government’s designation of the six organizations as “terrorist” came right after the spyware was discovered – seemingly an effort to cover up its actions and discredit these organizations in advance.

Front Line Defenders then investigated devices belonging to members of the six designated Palestinian civil society organizations and found that five additional devices were hacked with the Pegasus spyware.

Ayah Ziyadeh, Americans for Justice in Palestine Action (AJP Action) Advocacy Director said, “This report demonstrates the pervasiveness of the Israeli security apparatus and its violent attack on Palestinian civil society. It proves that Israel perceives Palestinian civil society and human rights organizations as a threat that must be monitored, infiltrated, and subdued – including American citizens like Ubai Al-Aboudi.”

On October 24, 2021, the University of Toronto Citizen Lab reported that New York Times journalist Ben Hubbard was targeted by the same spyware from June 2018 to June 2021, during the time he was reporting on Saudi Arabia, and writing a book about Saudi Crown Prince Mohammed bin Salman.

On November 3, 2021, The Commerce Department’s Bureau of Industry and Security (BIS) added two Israeli entities, NSO Group and Candiru, to the Entity List for engaging in activities that are contrary to the national security or foreign policy interests of the United States. They were listed based on evidence that they developed and supplied spyware to foreign governments that used these tools to maliciously target government officials, journalists, business people, activists, academics, and embassy workers.

Ayah continues, “We demand the White House investigate these allegations brought forward in the report and ensure our tax dollars do not contribute to the use of this spyware against American citizens at home and abroad. We also ask that members of Congress support Congresswoman Betty McCollum’s resolution condemning the racist and unjust “terrorism” classification of the six Palestinian organizations.”

For more information or to schedule an interview, contact Media Coordinator Malak Shalabi at (888) AMP-1948 or malak@ajpaction.org.