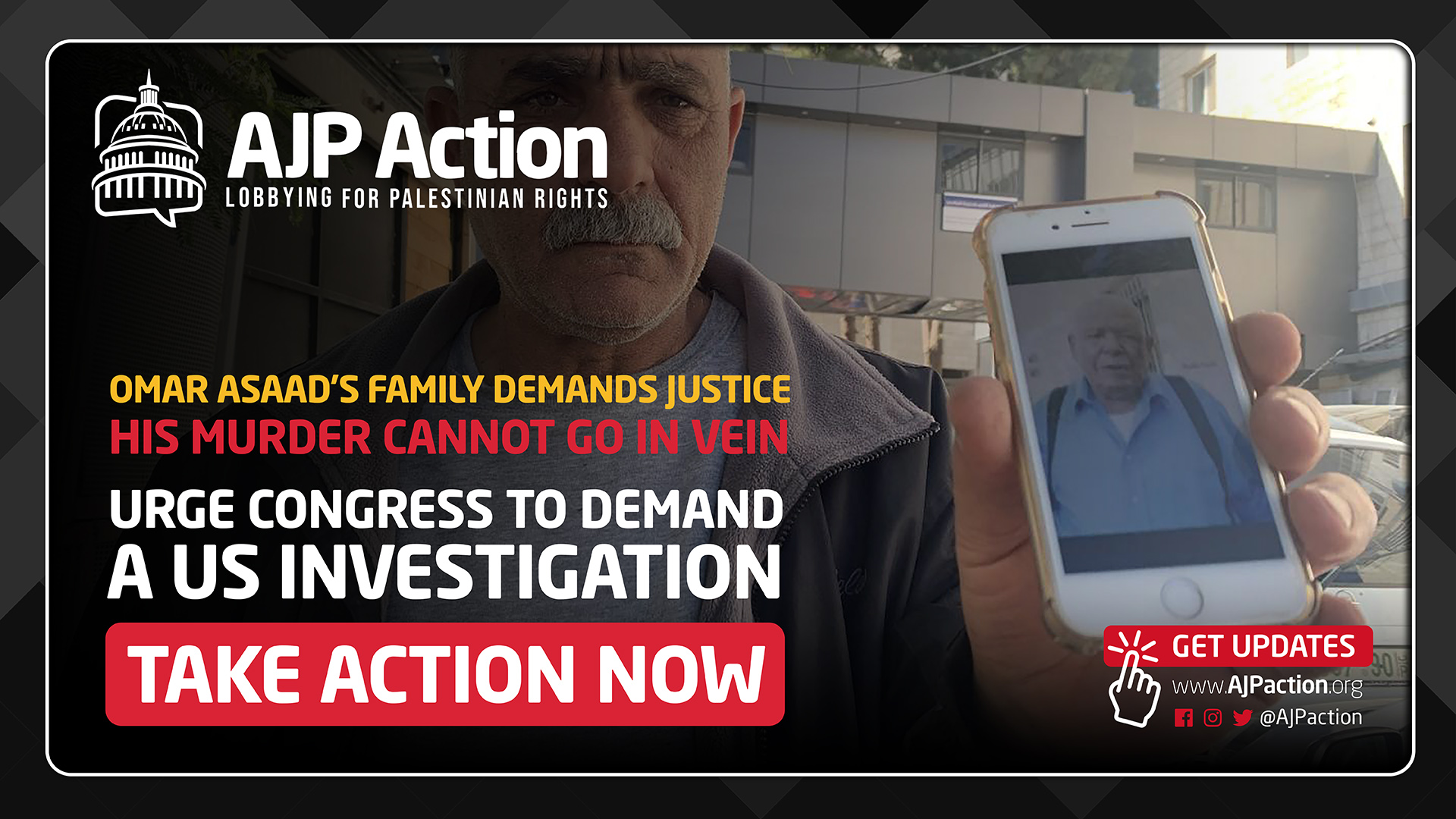 Earlier this week, Israeli forces in the West Bank village of Jaljilya stopped 80-year-old Palestinian-American Omar Abdulmajeed Asaad as he was driving home after visiting family in his village. According to this unsettling report, he was dragged out of his car, beaten by Israeli troops until he was unconscious, and left on the ground to die apparently of a heart attack.

AJP Action is incredibly saddened by this news and is working with the family to ensure that justice is served for Omar as well as his family. We cannot allow the Israeli military to move past this without adequate accountability, nor can we allow such an event to occur again.

This comes on the heels of renewed talks between the Biden administration and the Israeli government aimed at the possible inclusion of Israel in the Visa Waiver Program. Israel has long held a discriminatory policy against Palestinian Americans attempting to enter its borders. To be included in this program, the law requires that ALL Americans be treated equally. The gruesome murder of Omar is yet another reminder of Israel’s disrespect for the United States, its interests, and its contempt for American citizens. Despite the disrespect and being the largest recipient of US foreign aid, Israel continues to be dismissed of any proper accountability.

We cannot, and will not, allow our government to remain silent on Israeli crimes and their continued trampling on the rights of American citizens. The irony lies in the fact that Israel commits horrible crimes and consistent violations of international human rights law, taking advantage of the international cover that the United States provides for its crimes, and the weapons and money we have continued to provide it and enable its actions with.

Omar’s killing was mentioned by State Department spokesperson Ned Price on Wednesday, where he conveyed condolences, stated that the “appropriate” consular services were being provided, and indicated that the United States has moved to “seek clarification” from Israel on the tragedy. But this is not enough.

We will not stand idle as this case is dismissed through an investigation conducted by the same military that arrested, assaulted, and, ultimately, murdered Omar. Omar and his family deserve justice, and we must bind together to help them get it.

Per the family’s wishes, help us get an independent investigation started on the matter by urging your congress members to demand the US State Department do so HERE.