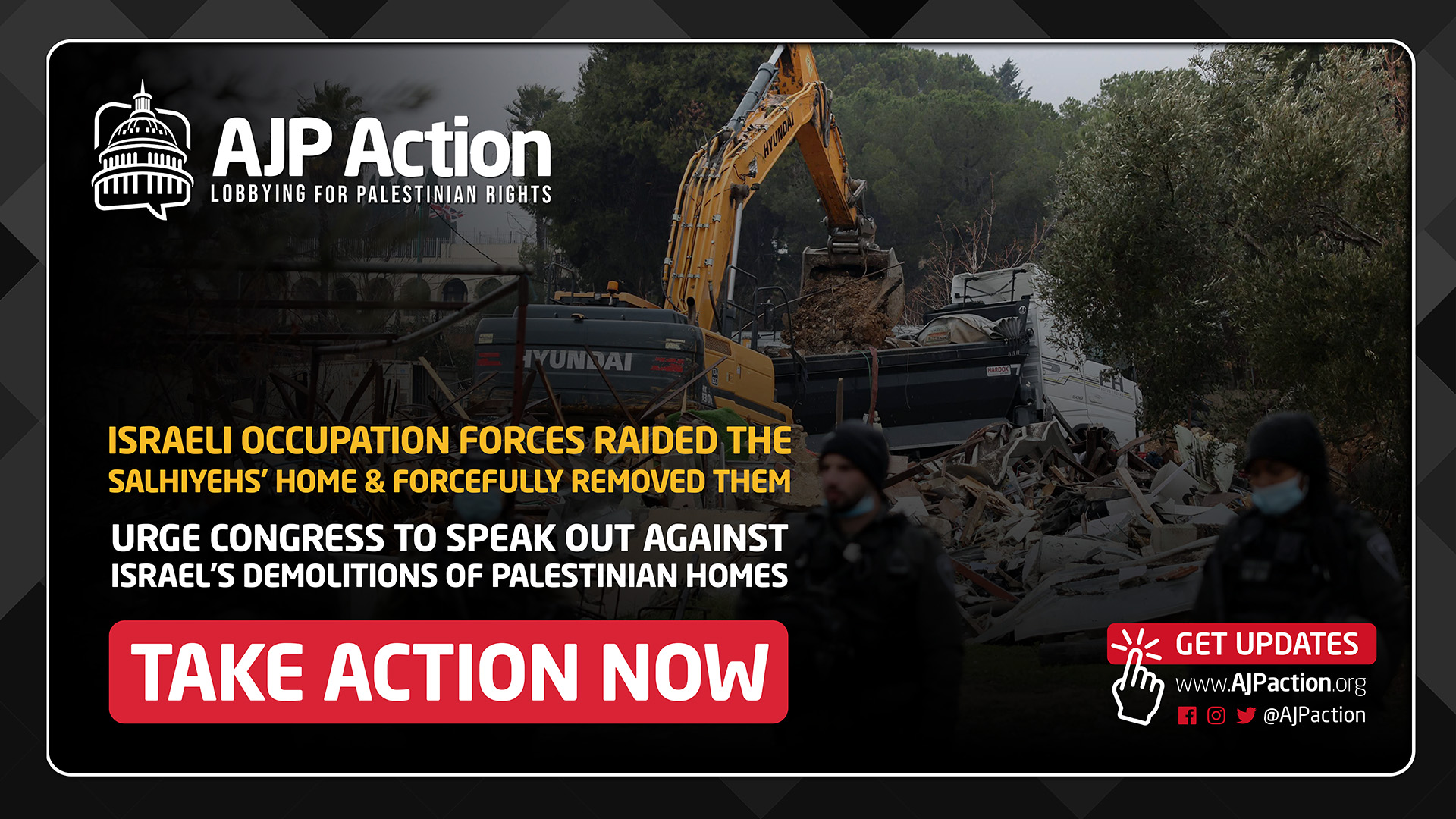 Last night, Israeli forces raided the Salhiyeh family home in Sheikh Jarrah and forcefully removed them from their house after assaulting members of the family, including a nine-year-old child, and arresting the father, Mohammed Salhiyeh, and his sons.

AJP Action condemns Israel’s crime and demands that the U.S. clearly states its opposition to the demolition of the Salhiyeh family home, delineate the steps it will take in accordance with the applicable international and U.S. laws, and firmly pressures Israel to put a strict end to Israel’s home demolition policy.

Help us hold Israel accountable by contacting your Members of Congress now!

You can also tweet about the issue using sample tweets from this doc.

The Salhiya family is one of several that Israeli settlement organizations are trying to ethnically cleanse in Sheikh Jarrah for the purpose of expanding settlements and Judaizing Jerusalem, which is a war crime. Meanwhile, the Jerusalem municipality claims that the Israeli forces were carrying out an “eviction” order of “illegal buildings built on [public space] designated for a school for children with special needs … which can benefit the children of the entire Sheikh Jarrah community,” that was approved by the court.

Israel masks its apartheid policies by invoking “public purpose” to conceal the fact that one of the main aims in Sheikh Jarrah is to build a touristic “King’s Garden” linked to the so-called Biblical “City of David.” This “public purpose” excuse empowers Israeli officials with broad discretion to expropriate private Palestinian homes, and dispossess its inhabitants based on what Israel determines to be “public needs.” Public purpose in this context is a euphemism for ethnic cleansing and settlement expansion. The homes that Israel wants to demolish in Sheikh Jarrah’s neighbourhood were built at least a decade before Israel occupied East Jerusalem in 1967.

Israel’s demolition of Palestinian homes and businesses constitutes a “grave breach” of international humanitarian law, specifically the Fourth Geneva Convention, which includes as grave breaches “extensive destruction and appropriation of property, not justified by military necessity and carried out unlawfully and wantonly,” and even “unlawful deportation or transfer” of the occupied population (i.e Palestinians). As a result, Israel’s actions are subject to criminal liability. Moreover, the legal concept of universal jurisdiction obligates State Parties to the Fourth Geneva Convention to arrest and prosecute those responsible for grave breaches of the Convention.

Sheikh Jarrah is located in East Jerusalem, which was illegally annexed by Israel. As the occupying power, Israel does not possess sovereignty over East Jerusalem and is vested with only temporary powers of administration.

Israel’s policy of home demolition is a key element of its military occupation of the West Bank, including East Jerusalem. Sheikh Jarrah provides a representative sample of this brutal policy. Israel’s settlement policy in East Jerusalem is strategic and methodical and is essential to its goals to further expand its occupying regime across Palestinian land. In the case of Sheikh Jarrah, the plan is to create a “ring of settlements” around the city that will entrench the military occupation and further segregate East Jerusalem from the rest of the West Bank.