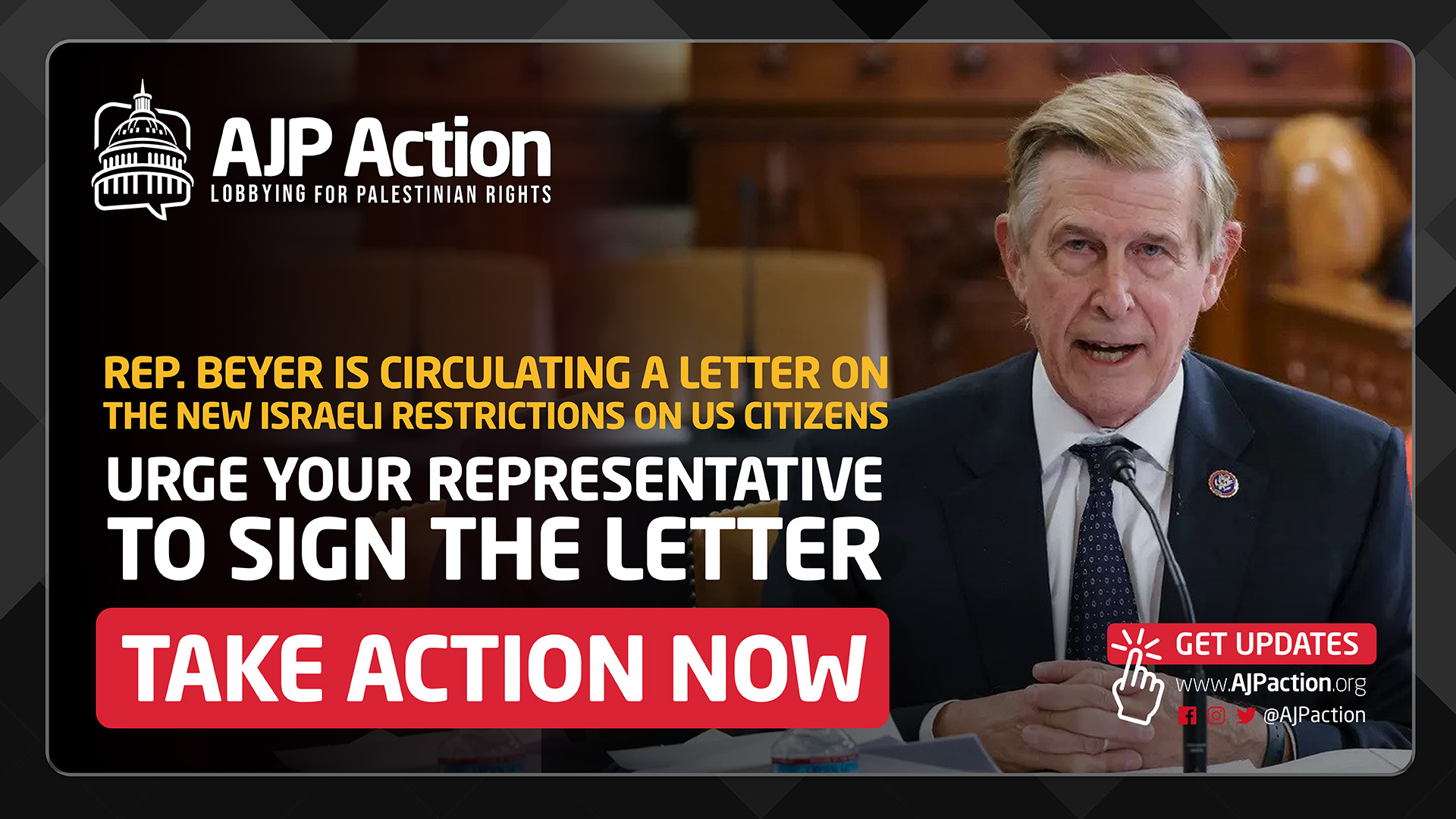 We just learned that Representative Don Beyer (D-VA) is circulating a Dear Colleague on the new Israeli travel restrictions on US citizens that will go into effect Thursday, urging the Biden administration to ensure fair treatment for ALL American citizens at borders controlled by Israel.

The new restrictions will immensely hinder the ability of Americans, especially Palestinian Americans, to travel, study, volunteer, invest, or work in the Palestinian West Bank. They also come on top of an existing regime of Israeli discrimination against American citizens of Palestinian, Arab, or Muslim backgrounds.

TAKE ACTION ASAP: Ask your Member of Congress to sign on to this letter before 12:00 PM tomorrow, Wednesday, October 18th.

Five Reasons Members of Congress Should Sign On to this Letter Demanding Fair Treatment for all Americans:

1. The incoming Israeli restrictions formalize existing discriminatory entry policies against US citizens. All US citizens, especially Palestinian Americans, must have an unfettered right to freely travel to the West Bank consistent with Israel’s treaty obligations.

2. Israel’s discriminatory entry policies are part of its separate-and-unequal, apartheid regime that privileges Jewish Israelis at the expense of indigenous Palestinians. These restrictions do not apply to people traveling to illegal Israeli settlements.

3. Israel is intensifying its discriminatory entry policies toward Palestinian Americans while trying to join the prestigious Visa Waiver Program, which requires participating countries to provide reciprocal visa-free travel to US citizens on an equal basis.

* As the letter notes, “In light of the DHS position that Israel does not currently meet all VWP designation requirements, including extending reciprocal visa-free travel privileges to all U.S. citizens and nationals, it is clear that Israel cannot be admitted into the VWP.”

4. No tracking mechanism exists for the State Department to record and monitor Israel’s discriminatory entry policies. This letter promotes transparency by asking the Department of State to set up a hotline to help US citizens and produce a report for Congress.

5. Members of Congress should be more vocal in advocating for the rights of their constituents, who face systematic discriminatory Israeli entry policies based on their national origin, religion, and political opinions, as the State Department confirms in its travel advisory.

Urge Congress to Stop $1 billion in weapons for Israel today!