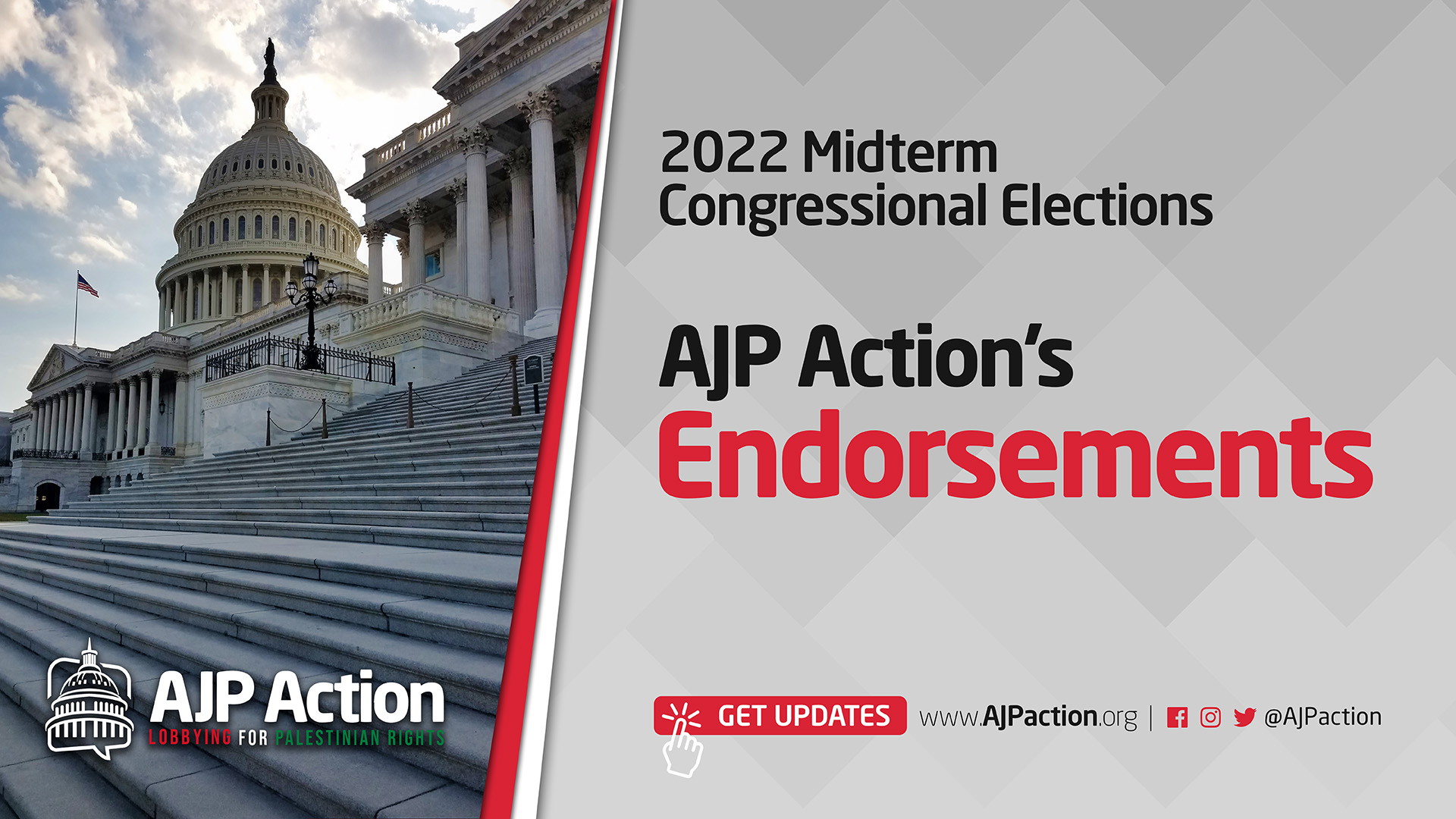 For the 2022 midterm congressional elections, Americans for Justice in Palestine Action is excited to endorse candidates for office whose positions toward Israel and the Palestinian people broadly align with our principles and our mission of ending Israel’s oppression of the Palestinian people.

“I am proud to stand shoulder-to-shoulder with Palestinian-Americans and Muslim-Americans as we work for human rights, peace, justice, and freedom from military occupation for the Palestinian people. AJP Action’s endorsement for my re-election to Congress is a powerful validation of our shared commitment to building a better future for all Palestinians.” – Rep. Betty McCollum

“I am grateful to have the trust and endorsement of AJP Action for my election to Congress. For too long, the Palestinian people have suffered under a brutal occupation and siege that has neglected their humanity, dignity, and rights. I am committed to fighting for justice and a peaceful future that leaves no individual or community behind.” – Muad Hrezi

“As a human rights attorney and activist, I am honored to receive the endorsement of AJP Action — an organization doing critical advocacy work on the defining global justice issue of our time.” – Huwaida Arraf

“For far too long Palestinians have been erased and abandoned by politicians that choose political expediency over human rights. NY-11 is home to one of the largest Palestinian diaspora communities on the planet and I am proud to receive the support of Americans for Justice in Palestine Action in our collective fight for justice,” Ramos DeBarros said. “There can be no peace without justice and no justice without confronting hard truths. We must cast aside systems of violence and exclusion and replace them with systems of care and cooperation that work for all of us. Now is our time.” – Brittany Ramos DeBarros

“I’m honored and humbled to receive an endorsement from Americans for Justice in Palestine Action for our race in California’s 32nd Congressional District. Just last week, Amnesty International released an extensive report declaring Israel to be an apartheid state – joining similar declarations made by the United Nations, Human Rights Watch, and the Jerusalem-based B’Tselem. Every year we watch as the civil rights, public health, and economic conditions of the Palestinian people in Israel, the West Bank, and Gaza erode further. In 2021, the United States sent $4.8 billion in military aid and equipment to Israel, compared to $360 million – just seven percent of that amount – in humanitarian aid to the Palestinian people. At this moment of reckoning, where a growing majority of Americans are demanding justice for Palestine and over a quarter of American Jews now identify as anti-Zionist, we need more outspoken advocates in Congress for Palestinian human rights. I will proudly continue to stand in solidarity with the Palestinian people in their movement for freedom, in support of BDS and against its criminalization, and for the right of return.” – Shervin Aazami

“As a Black woman, I grew up on the history of Apartheid in South Africa and I know all too well the types of state violence inflicted on Black people here in the United States. As such, it is imperative that, as I seek to eradicate state violence at home and abroad, I also show solidarity with the Palestinian Liberation Movement. As a Congresswoman, that is exactly what I’m going to do.” – Imani Oakley

“Our movement in Orange County is proud to fight alongside Americans For Justice In Palestine Action. The fight for human rights and dignity for our brothers and sisters in Palestine needs leaders, and AJP Action is doing crucial work. We must always stand against colonizers and oppressors, but it falls on our shoulders when our nation supports or aids that imperialism.” – Mike Ortega

“The Palestinian people deserve dignity, freedom, and justice. I’m happy to be endorsed by AJP Action, an organization working toward those goals.” – Iymen Chehade

“I am honored to receive the endorsement of Americans for Justice in Palestine,” said Congresswoman Marie Newman. “We need leaders in Congress that will stand up for human rights, and I pledge to continue our partnership as we fight for equality and justice both at-home and abroad.” – Rep. Marie Newman

“As the daughter of a refugee who was forced to flee Chile following a US-funded coup, I recognize how interconnected my family struggle is with the people of Palestine. Americans for Justice in Palestine Action (AJP Action) is leading the way in defending Palestinian human rights, and I’m proud to receive their endorsement. !Viva Palestina!” – Stephanie Gallardo

Are you or do you know a candidate who wants to work alongside and be endorsed by AJP Action in order to strengthen a shift in the narrative of Israel and Palestine, and create a more sustainable path for Palestinian rights in the American progressive agenda?

Fill out this form or send it to a candidate you believe should be endorsed by us!